Once the honeymoon is over, married couples tend to get caught up in the daily hustle and bustle of home life, especially if they have young children. Both partners get busy planning their lives around their kids, and around their jobs, leaving little energy for couple time in the busy family calendar. Add to this extensive technology use, whether for work or leisure, and you have a recipe for couples growing older under one roof, but not really growing together.

Sometimes you just need time away in order to reconnect. Sound familiar? If you’re looking to create space to spend time with your spouse and keep the romantic spark alive in your relationship, a romantic weekend getaway can make a world of difference.

END_OF_DOCUMENT_TOKEN_TO_BE_REPLACED

Your suitcases are packed and you’re ready to jump in the car for a romantic escape to Alure Stanthorpe, but what are you going to listen to? Not to worry! We have it all sorted for you.

Last year we published the Top 100* Romantic Songs playlist. This year we thought we should step up and curate a fabulous 3 hour Drive Songs playlist.

We can safely say we’ve listened to A LOT of songs searching for the right playlist for your drive to Stanthorpe. We wanted a fabulous, fun, mostly Aussie rock, sing out loud, playlist to make your road trip in the car fly.

With lyrics like “Get your motor runnin’, head out on the highway. Looking for adventure in whatever comes our way”, we had to kick off with Steppenwolf. Quickly followed by Ed Sheeran’s ‘Castle on the hill’, Shepphard, The Angels, Neon Trees and Sia. If you’re travelling from Brisbane, by the time you’ve heard Silverchair, Powderfinger, Crowded House and Australian Crawl you should be at Aratula and starting the beautiful climb up Cunningham’s Gap.

So, here it is! Your fab, fun, sing out loud, Road Trip Songs playlist. Enjoy!

Whether you’re a couple, newly wed or married for years, there’s always that little bit of pressure on Valentines Day don’t you think? Did you remember? Did you book anything? Will it be memorable (for all the right reasons)? You’re so lucky today because right now you still have time to make this the year that will be forever remembered as the best Valentines Day surprise ever. Because you remembered. You booked it. You went a little crazy with the indulgence package and one of these luscious rooms met the gaze of your loved one after a leisurely drive through country Queensland. The romantic picnic lunch was just divine. Dinner was exquisite and how wonderful did the stars look from the hot tub? Yes, that sure was a great weekend. Never to be forgotten. No matter what you do from here on in you will always be able to remind your loved one of that glorious weekend spent at Alure Stanthorpe in the Granite Belt. Yes I forgot the milk but how good was that weekend at Alure? I forgot to pickup the kids but oh my Alure was great wasn’t it? Do you see where I’m going with this? Booked your romantic getaway yet? You’re welcome.

END_OF_DOCUMENT_TOKEN_TO_BE_REPLACED

You’ve booked your romantic escape at Alure in either a luxury villa or our glamping tent. And you’ve received all the information on winery tours, romantic getaway packages and the very best Stanthorpe and Granite Belt restaurants. So, now the big question is… What do I pack?

What to pack when travelling to Stanthorpe?

Yes, always pack a jacket. Regardless of the season, what the BOM says, what your colleagues say, or even your best friend,  pack a jacket. Even in summer? Yes, even in summer pack a jacket. As we say, the weather ‘turns on a dime’ and a day that started warm and cosy can become quite cool or cold.

You see a lot of the Granite Belt is approximately 850m – 900m above sea level. Alure Stanthorpe is even higher at 950m above sea level. In contrast, our nearest capital city, Brisbane, is only 27m above sea level. All this High Country elevation leads to a cool, temperate climate around Stanthorpe. We are blessed to experience four definite seasons, sometimes in one day! END_OF_DOCUMENT_TOKEN_TO_BE_REPLACED

At Alure we absolutely love helping guests plan the perfect romantic couples getaway into the heart of Queensland’s high country, Stanthorpe on the Granite Belt. We already have a range of ultimate romantic packages, tours and indulgences such as relaxing in-villa massages. These are of course in addition to inclusions such as our luxe hot tubs and crackling fires to relax by.  The idea of a Love Song playlist seemed so obvious.

Why had we not thought of this before? (we wondered).

Ha! How we laugh at our naivety in reflection.  It was quite a surprise when we embarked on the journey deep into the world of love songs. There were so many! How on earth were we ever to choose the right songs for our guests? END_OF_DOCUMENT_TOKEN_TO_BE_REPLACED

Enter Alure Stanthorpe and you’ll be transported to a magical setting that makes romance sparkle. This exclusive couples accommodation in the Granite Belt of Queensland’s High Country is nestled in the midst of big skies, spectacular scenery, and many natural and cultural attractions. True to its name, Alure Stanthorpe has irresistible appeal to any couple seeking a romantic winter getaway.

Alure’s peaceful Stanthorpe accommodations pamper guests with plush furnishings and luxurious comfort. Two villas and a deluxe glamping tent each spaciously accommodate one couple, allowing you to relax in style. Each unit has a private deck and heated outdoor spa that invites you to glide into soothing bubbles and sip a glass of locally produced wine. Could you imagine a more sublime experience? Set on 50 acres of land, these three romantic accommodations are secluded, so every couple enjoys an undisturbed view of the magnificent countryside. END_OF_DOCUMENT_TOKEN_TO_BE_REPLACED 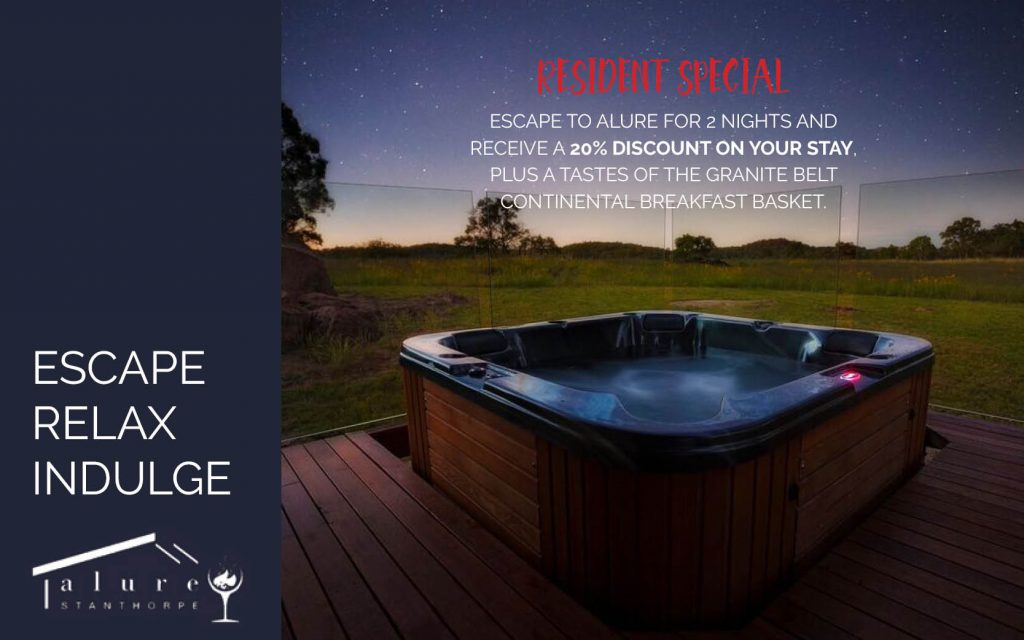 At Alure Stanthorpe, we understand how hard it is to get away. However, life is too short not to reward yourself and spend special time with your loved one.

So book a truly romantic escape for two in your backyard at Alure; home to Australia’s most luxurious glamping tent and two stunning villas. Watch the milky way with a glass of Granite Belt wine in your private outdoor heated spa.

To thank our amazing locals for their support we are offering a 20% discount on all stays during the month of February 2017. *Conditions apply

Can’t leave home without your well-loved pooch? Our pet-friendly villa comes complete with a doggie bathrobe and gourmet doggie treats. 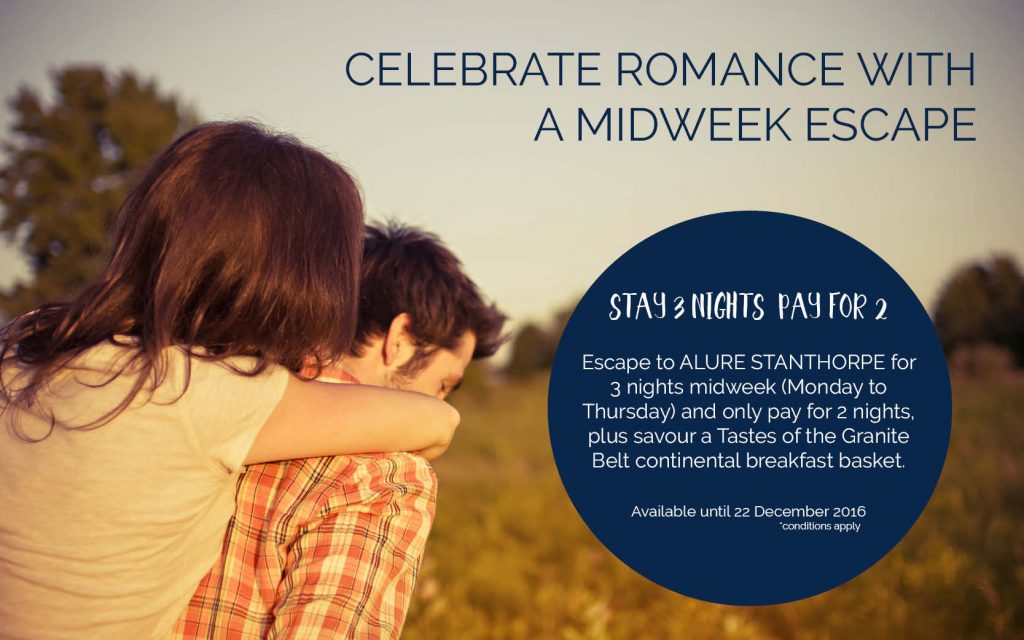 We are all about romance and reconnecting with the special person in your life. Escape the coastal humidity at Alure for 3 nights midweek (Monday to Thursday) and only pay for 2 nights. Valid until 22 December 2016.

Book some romance in your life now!

Have you been dreaming of a romantic getaway and pet-friendly accommodation in the heart of Granite Belt Wine Country, where after a full day of exploring and sniffing, you can stretch out by the fire, or end the day stargazing in your own private courtyard?

• With your sunny disposition that you use an ‘inside voice’ so as not to disturb other guests.
• You resist the temptation to climb on the furniture, or sleep on the bed.
• You only use the outside toilet facilities and would never mess inside.

What about your humans? Do they…?

• Include you in all their daily travels and would never dream of leaving you behind? Alure has a list of pet friendly attractions and activities. Occasional pet sitting is available on request
• Keep you safely on a leash when outside to protect you from native animals, or from getting lost?  Foxes might find you very tasty and you certainly don’t want to get lost while enthusiastically exploring the natural bushland.
• Pick up your outside er… messes?  Bathroom facilities are located outside your villa and Alure provides doggie bags.

There is just one pet friendly villa and prior approval is required.

Alure Stanthorpe will provide for your enjoyment, your very own plush bed, food and water bowls and a gift bag of toiletries & gourmet treats.

Alure the Scene for Love Stories

An unlikely romance of the four-legged variety is blossoming at an exclusive retreat for couples nestled amongst tranquil bushland and boutique wineries of the Granite Belt.

Ms Marion Carrick, co-owner of Alure Boutique Villas, says the unusual relationship is emerging between a resident sheep and pony is set to rival any other animal love story.

“We have so many beautiful love stories from the couples that stay with us and now we have our own, between Monty the sheep and Bek the pony,” said Ms Carrick.

“They stand shoulder to knee, but as is the case with true love, their difference in size does not deter this romantic couple from seeking each other across the paddocks of our retreat,” she said.

Bek is a 9 year old Royal Champion Welsh Mountain pony and Monty is a 3 year old purebred miniature Babydoll Southdown ram standing around half her height.

“Monty follows his beloved Bek around the paddock, gazing at her lovingly and when not together he whickers at her when she walks past.”

Ms Ruth McLennan, Marion’s mother and co-owner of Alure Boutique Villas, says most animal love stories seem to occur between two that are in enclosures alone, with no other animals of their species nearby.

“What makes this romance different is that Monty is paddocked with 16 other sheep, yet he still chooses Bek,” said Ms Carrick.

“It’s very Romeo and Juliet, and our guests marvel that love really does come in all shapes and sizes,” said Ms McLennan.